Richard reached the South Pole on 27th December 2010, where he stayed until 1st January 2011, when the clock started ticking on his race to climb the famous 7 summits and stand on all 3 poles in 7 months.

Richard left for Antarctica from Cardiff on 12th December 2010 and so the 737 Challenge began one hundred years after Captain Robert Falcon Scott’s 1910 Terra Nova expedition, which also began from Cardiff.

Rich skied the last degree to the South Pole, starting from 89 degrees south, battling the last 60 nautical miles/111km to the bottom of the earth.

Whiteouts, temperatures of -35˚C and hauling his pulk weighing 50kg through sastrugi provided plenty for Richard to think about during his first leg of the 737 Challenge.

He spent Christmas day 14 miles from the pole, opening the few presents and cards he took as luxury items.

Two days later, and after eight days of skiing, Richard reached the South Pole for the very first time. He had to camp out at the pole until 1st January 2011, seeing in the New Year at the pole to ensure his world first record to stand on the 7 summits and 3 poles would be within the same calendar year. Richard was also very proud to be part of a special centenary service, repositioning the marker of the Geographical South Pole and celebrating 100 years since Norwegian explorer Roald Amundsen reached the South Pole.

Richard's first expedition in Antarctica struck a chord, the continent was to become a special place for Richard in the future but at that moment in time, it was leg number one down - The 737 Challenge had lift off!

New years day been and gone local time here is GMT+13. There was a mad party with the pole staff for New Zealand new year outside this morning. I am being picked up tonight just after midnight, breaking down camp now. Got to fly everything off the…

Listen to the latest audio

The pole station was awesome. Visited the greenhouse veg in space (growth chamber) + o2 product project and gym. Staff were really friendly and cool. It was a privilege to see inside, very few have. Even had a biscuit and coffee! I am in tent at the…

Easy day today, have done a bit of hiking with Scott, my new tent mate and have been sorting all my gear ready for Vinson, the next leg. Have been invited in for a tour of the South Pole station tonight which is really cool as not many people get to look…

Slept for ages. My body is confused on 3 time zones! Cold but comfortable. Had wine and steak and cheese toasty last night. Told to move our toilet tent by the NSF (National Science Foundation) thatâ€™s been the job for today! All good. 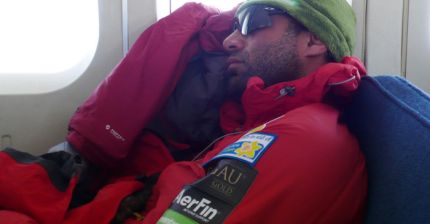 Antarctica and the South Pole.

During the ‘Heroic Age’ of Antarctic exploration, from the late 19th century to the early 1900s, the continent was a forcing ground for bravery and endurance that tested its pioneers physical and mental limits to extraordinary levels and sadly sometimes beyond. Names such as; Captain Robert Falcon Scott, Roald Amundsen, Sir Ernest Shackleton, Apsley Cherry-Gerrard and later Sir Ranulph Fiennes will always be synonymous with amazing levels of human endeavour on this beautiful and hostile continent. Norwegians, led by Roald Amundsen were the first to reach the South Pole on December 14, 1911.

Antarctica can be considered a desert as it has an annual precipitation of only 200mm (8 inches) along the coast and far less inland.

The South Pole is at an altitude of 2,835m/9,306 ft. The ice is estimated to be about 2,700m thick at the pole, so the land surface under the ice sheet is actually near sea level.

Aside from the hostile weather conditions, one of the things that makes expeditions tough in Antarctica is having to manhaul a pulk (sled) over and through Sastrugi. Sastrugi are sharp irregular grooves or ridges formed on a snow surface by wind erosion, saltation of snow particles, and deposition.

The polar ice sheet is moving at a rate of approximately 10 meters per year meaning that the position of the American Amundsen-Scott South Pole Station and other artificial features relative to the geographic pole gradually shift over time. Each year the small sign signifying the Geographic South Pole is repositioned to compensate for this movement.

The coldest temperature ever recorded on Earth was −89.2°C/−128.6°F at the Russian Vostok Research Station in Antarctica on 21 July 1983.

Richard Parks completed the first leg of his world first 737 Challenge this morning, arriving at the South Pole and completing the first of 3 poles he will face during his 7-month …