The highest mountain in South America and the largest peak outside of the Himalayas at 6,959m/22,830ft.  Richard summited Aconcagua on 5th February 2011.

Richard summited Aconcagua in a very small weather window, taking the decision to attempt the summit from camp 2 instead of the usual camp 3 due to weather conditions.

This presented him with a brutal and long summit day but the best shot at success.  With bad weather drawing in, he had one chance to attempt the summit and made it, that same week a climber died on the mountain just below the summit on the canaleta.

Aconcagua stands on the border with Chile and towers above the surrounding peaks in the Argentinean Andes. The mountain lies slightly to the east of the main Andean chain and is surrounded by a very steep face on its south, a gentle slope on the north, the huge Polish glacier flowing to the east and a series of arêtes and couloirs to the west. The mountain has two summits - North (6,959m) and South (6,930m), joined by the Cresta del Guanaco ridge which is approximately one kilometre long.

Got the bus back to Santiago in Chile and flight home tonight. Will be back for a few days to sleep, re pack and then Iâ€™m off to climb Kilimanjaro with Marie Curie Nurse Janet Suart. I am also going to be joined on this leg by some of the…

Had my 3rd shower of the year last night, awesome! Arrived in Mendoza at 12.30am and I am enjoying a little civilisation and food today. Itâ€™s starting to sink in that I have 3 legs under my belt, a little relieved actually! Didnâ€™t sleep well in a…

Hi Guys, We are back at Plaza de Mulas base camp after packing up from camp 2 Nido de Condores. It took us about 5 hours to get down from the summit meaning it was about a 17 hour day. We were all pretty shattered last night but the team is in good… 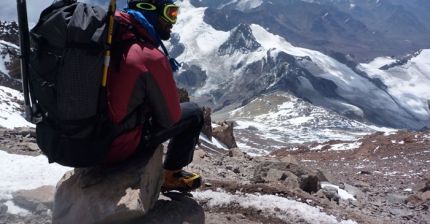 Aconcagua is the second highest of the 7 Summits.

This South American giant is often underestimated, which has resulted in serious injuries and death, mostly on the normal route. The extreme cold, stormy winds and altitude make this mountain a serious undertaking.

Aconcagua’s name has roots in the Quechua language and when translated means "The Sentinel of Stone".

On a clear day it’s possible to see the Pacific Ocean which is some 160km/92miles away.

The skeleton of a guanaco was found on the summit ridge and in 1985 a well-preserved mummy was found at 5,200m/17,060ft on the southwest ridge of Cerro Pyramidal, an Aconcagua sub-peak.

According to some that have climbed in the Himalayas, the 6,959m/22,830ft of Aconcagua represents an even greater physiological distance as a result of the Himalayas having vegetation up to 4,999m/16,400ft, while in the Central Andes Mountain range the vegetation reaches only to 3,505m/11,500ft and the thinner atmosphere this far south on the globe.

Approximately 25% of the 25,000 strong Welsh Argentine community in the Patagonia region of Argentina speak Welsh as their first language.

Richard Parks has successfully reached the summit of Aconcagua in Argentina, the highest summit in South America completing the 3rd leg of his world first 737 Challenge.