As Richard stood on the summit of Elbrus, he became the first ever person to climb the highest mountain on each of the world's 7 continents and stand on all 3 poles (The North Pole, The South Pole and the summit of Everest) within 7 months.

He reached the summit 213 days after leaving Cardiff to set off for his gruelling 7 month expedition.

Elbrus is Europe’s highest peak and the highest point in the Russian Caucasus.

Hi Guys. Apologies for not blogging for a few days, since summit day I've been busy travelling. We trekked back down to base camp after a night at high camp after summiting. On the morning of leaving high camp Dai Camera was on the loo and Parksy…

Today I completed my world first 737 Challenge summiting Mount Elbrus at 11.53 local time, 08.53am UK time. See below for all the details. Thank you to everyone who has ever followed, donated or supported me along the way.

We are at camp 1 which is high camp at 3,800m we are planning on leaving at 3am tomorrow morning (midnight your time) to attempt the summit. We aim to summit between 7am-10am UK time. Arriving at Moscow and getting the transfer onwards was surreal. I… 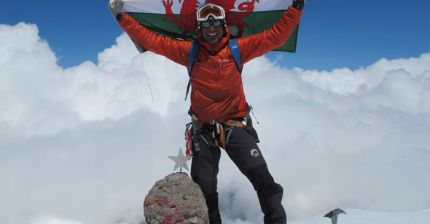 This range of mountains stretches for 550 miles linking the Caspian Sea to the Black Sea, and creates a natural boundary between the steppes of Russia and the southern states of Azerbaydzan, Georgia and Armenia. Mt. Elbrus is an extinct double-headed volcano with its west summit standing at 5,642m/18,510 ft and the east summit slightly lower at 5,621m/18,442 ft. The conical shaped Elbrus stands in the highest and most extensively glaciated part of the Caucasus mountain range.

Elbrus is an extinct volcano which last erupted around 50 AD. Its crater is approximately 400 meters wide and is now filled with ice and snow.

The Caucasus Mountains are the result of a tectonic plate collision between the Arabian plate moving northward and the Eurasian plate. They form a continuation of the Himalayas, which are being pressed upwards by a similar collision zone with the Eurasian and Indian plates. The entire region is regularly subjected to strong earthquakes from this activity

The Germans briefly occupied the mountain during World War II with 10,000 mountaineer soldiers.