The final stage of technical development in the preparation for his 737 Challenge, specifically the Everest leg.

Richard joined a commercial expedition organised by one of his partners Jagged Globe as the final stage of technical development in the preparation for his 737 Challenge, specifically the Everest leg.

It was also Richard’s first time on an 8,000m mountain.

This expedition was a huge success and a really valuable addition to Richard’s mountaineering portfolio, despite the conditions on the mountain that year causing the Tibetan authorities and all the major teams to abandon the mountain due to severe avalanche risk.  That year the summit success was 50% as only two solo climbers independently reached the summit. Sadly, only one made it back.

Richard and the Jagged Globe team had reached camp 2 at 7,000m/23,000ft before deciding to retreat from the mountain. 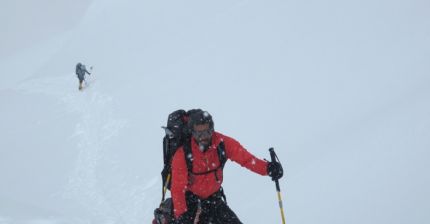 Cho Oyu is the sixth highest mountain in the world and the most frequently climbed 8,000m peak.

Cho Oyu means ‘Turquoise Goddess” in Tibetan as its stark shadows appear this colour in the light of the setting sun when viewed from Tibet.

The mountain is the western most major peak of the Khumbu sub-section of the Mahalangur Himalaya about 20 km west of Mount Everest. The mountain stands on the Tibet-Nepal border.

The peak can be approached on its south side from the Thame valley of the Khumbu region of Nepal leading up to the Lungsampa Glacier. From the north, the peak is approached from the Tingri Plain, to the Palung Glacier that lies below the peak's north face, and the Gyabrag Glacier that surrounds the Northwest face. Cho Oyu has three main ridges: the Northwest, the Northeast, and the Southwest.

Cho Oyu's impressive Southwest face, that rises up three kilometres high from the Lungsampa Glacier, drew the attention of the first expedition to the Everest Himal organised by the British in 1921. Three decades would pass before it was first attempted, in 1952, by an expedition led by Eric Shipton. They were turned back at 6650m (22,500ft) by the ice cliff on the Northwest ridge that proved to be beyond their technical limits.

Cho Oyu was successfully climbed two years later in the post-monsoon season of 1954 via the Northwest ridge by Austrians Herbert Tichy, Sepp Johler and Sherpa Passang Dawa Lama, who led the ice cliff that Shipton had described as obviously impassible.

Like all 8,000m peaks, the climb is a serious undertaking and demands fitness, mountaineering skill and self-sufficiency.

Richard, Steve and their team from Jagged Globe flew from Kathmandu to Lhasa spending a few days exploring the ancient Tibetan capital, taking time to let their bodies acclimatise, before driving across the Tibetan Plateau to Chinese Base Camp. From there, they loaded up Yaks and trekked to Cho Oyu base camp, below the north west face. Three camps are used on the mountain. High camp is at 7,500m to maximize the chance of success and is the launch pad for the summit, which is reached in 5 to 8 hours under normal conditions. From Cho Oyu’s summit it is possible to get an incredible view of Everest.

View the latest images from Richard and Steveâ€™s training expedition on the 6th highest mountain in the world, Cho Oyu in the Himalayas.