It was a tough expedition, which saw Richard climb on bullet hard ice on the autobahn, summiting in whiteout conditions with visibility no more than 10 metres and temperatures down to -40˚C.

Richard was still in the early stages of his career on mountains and a brutal expedition which might well have turned many people off, turned out to be a huge milestone in Richard’s mountaineering career, highlighting his skill and resilience to perform in the world’s most extreme conditions. 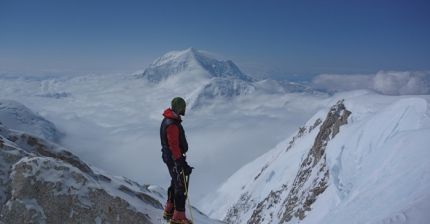 Its reputation as a highly coveted summit derives from its location near the Arctic Circle and the Pacific Ocean giving it some of the most ferocious weather in the world.  As a result of its location, in between Arctic and Aleutian weather systems, the weather on Denali is extremely unpredictable and unlike any other major mountain in the world. Extreme cold is another hallmark of Denali with temperatures routinely falling to -40˚C. Denali’s unpredictable and savage weather is an underlying cause of many accidents.

It’s remoteness requires climbers to be responsible for their supplies of food, fuel and equipment for up to a month on the mountain, carrying loads of up to 65 kg, split between an expedition rucksack and a sled.  The heavy loads and ferocious weather make Denali one of the toughest mountains in the world.

The Athabaskan translation of Denali means “The Great One”.

On average only 45% of climbers attempting the mountain successfully reach the summit.  During this expedition, due to bad weather conditions that percentage dropped to only 19%, however Richard was one of those lucky few to successfully summit that month.

Denali undergoes long periods of clear skies and high winds, and these conditions are most often seen during early part of the climbing season (April and May). Around May high winds and clear skies scour the mountain’s slopes clean of snow leaving behind solid blue ice testing the cramponing skills of even the most experienced climbers. During such weather, many climbers are lulled by the clear skies into pressing on to summit.  However, these winds routinely exceed 100 mph and have been known to pick climbers up and throw them down the slopes.