Richard summited the world's highest mountain on 25th May 2011, aged 33 and almost 2 years to the day since retiring from professional rugby.

Richard started this leg off the back of 5 months of expeditions and having 2 more mountains still to climb. Adding to the pressure, he arrived in to Everest base camp later than all the other teams on the mountain because of the previous North Pole leg. Richard's concern was that a traditional acclimatisation programme of climbing up and down the mountain expending energy through the perilous and energy sapping Khumbu Icefall could come at a cost.

As the end of the season was drawing near on Everest, the increasingly unpredictable and melting Khumbu Icefall along with avalanches rumbling near base camp meant that Richard decided on less acclimatisation rotations up the mountain, opting to spend longer at the higher altitude above 6,400m for 6 days.

His decision paid off and on 20th May after 21 days of climbing and acclimatising on Everest, Richard and his team, which consisted of Steve Williams and Richard's incredible Sherpa Mingma (on his 17th summit of Everest) left base camp for their summit bid. They would be one of the very last climbing teams to have the opportunity to summit that season.

On 23rd May they arrived at Camp 4 on the South Col at 7,950m. That evening they attempted to leave for the summit but abandoned their first summit attempt due to high winds. For Richard, Everest was all about holding his nerve.

Richard and the team were forced to spend another day in the death zone and re launched their summit bid on the evening of the 24th. After a punishing 10-hour climb which included Richard's oxygen mask freezing (incredible Mingma swapped his and climbed for another few hundred metres up to the south summit without oxygen before unblocking Richard's mask) Richard summited the highest mountain on Earth at 7.42am local time/2.57am UK time.

Steve followed Richard, summiting at 10.10am local time/5.25am UK time. Richard summited in cold conditions but with perfect visibility on the summit and relatively low winds. There was snowfall during the summit climb, which made progress on some of the tracks a little slow with the team having to break trail but Richard was blessed with an incredible summit experience - the highest mountain on the planet virtually to themselves.

He stood on top of the world just 45 days after he was stood on the geographic North Pole and was overcome by emotion calling home in floods of tears.

Joy and gratitude would soon turn to shock and disbelief...after descending to base camp Richard discovered he had grade 1-2 frostbite in his right big toe.

From elation to despair, he feared his world first 737 Challenge might be over and was in serious danger of losing his toe. From Everest base camp he was helicoptered straight to hospital in Kathmandu and on the first flight home with a heavy heart full of uncertainty. Denali, the highest mountain in North America awaited and he had no idea if he was going to be able to climb it.

Hi guys, I got home yesterday from Kathmandu. I got upgraded to business class on the way home and was so excited about this that I hardly slept on the flight! I did attempt to lie flat and sleep for a bit but then started playing with the bed controls…

Listen to the latest audio

After a few whiskeys with David Hamilton and the rest of the team at base camp I slept like a log...or it could be the relatively thicker air at base camp! I'm so disappointed about my toe but feeling less sorry for myself today. The helicopter came to…

Weâ€™ve just arrived back at base camp after 2 days of the toughest down climbing. Mentally and physically I'm drained, but you have to be on it as that's when accidents happen. It still hasn't real sunken in, I've been trying to process everything.…

I passed Steve on the south summit. He was pretty tired, not using o2 between camp 3 and camp 4 made it extra tough for him. Fairplay he summited about 2 and a half hours after us. It was great to see him and Iâ€™m made up he topped out. We got back… 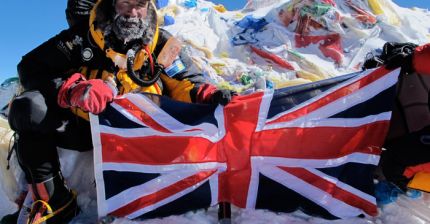 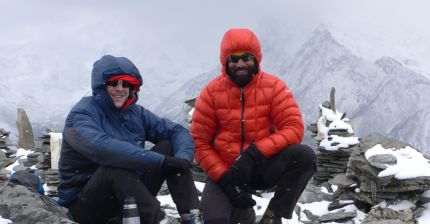 Mount Everest at 8,850m/29,036ft is the highest mountain on the planet and straddles the border of Tibet and Nepal in the Himalayas.

Most attempts are made during May before the summer monsoon season, when average wind speeds are lower on the mountain. Attempts are sometimes made after the monsoons in September and October, however the additional snow deposited by the monsoons and the less stable weather patterns make climbing extremely difficult during this period.

From Everest base camp, 5,380m/17,70ft the route to the summit can be divided into four separate sections. The Khumbu Ice Fall which is a jumbled morass of ice-blocks, ice towers, and centuries old ice, riven by crevasses, all moving inexorably downwards from the Western Cwm to the Khumbu Valley, below. It's dangerous, as the ice is constantly moving and ice towers can collapse without warning. It is not a place for the faint of heart. The Western Cwm, which is a climb into the hall of the mountain Gods. Awesome and gigantic walls tower over you as you move from Camp 1 towards the full expanse of the Cwm above. The Lhotse Face, Everest's most impressive wall. This steep section makes for the most grueling and technically intricate section on the mountain. Gusting winds, snow plumes and the sight of the steep face above greet you from its base.

Finally, The Summit Ridge. Negotiating the Balcony, Hilary’s Step just below the summit and the sheer drops from the ridge down the Kangshung Face on one side and the South West Face on the other.

Everest is 5 and a half miles above sea level and equivalent to the size of almost 20 Empire State Buildings.

Its original European name of Peak XV was renamed to Everest after Sir George Everest, a British surveyor-general of India from 1830-1843.

The ‘death zone’ above 7,900m/25,917ft, is the point at which there isn’t enough oxygen in the air to sustain human life. Richard and Steve used supplementary oxygen as do the vast majority of climbers. However there are a very small handful of exceptional individuals that have summited without supplementary oxygen. On 8 May 1978, Reinhold Messner of Italy and Peter Habeler of Austria were the first to ascent without supplemental oxygen.

Conditions are so difficult in the death zone that some of the corpses of climbers that sadly lost their lives on Everest have been left where they fell and are visible from the climbing route.

Climbing The Great One - the toughest challenge yet

Richard Parks believes that climbing Denali, also known as Mount McKinley could possibly be his toughest leg of the 737 Challenge.