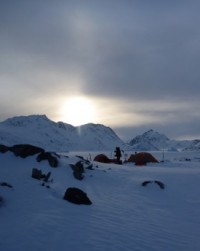 Richard is in the UK now for a week, before heading back out for more training. This time he heads to Alaska to climb Denali, North Americaâ€™s highest mountain and one of The 7 Summits he will be attempting next year. The logic behind this is gaining more vital experience at altitude and, if for any reason Richard is delayed on either The North Pole or Everest during the challenge, he will have the route knowledge and psychological confidence to go to plan B: a 4-5 day ascent instead of the standard 28 day itinerary! I should also mention at this point that only 45% of all climbers attempting Denali successfully summit...

Richard said, â€œIt is starting to become a little daunting, especially as I had never stepped on a mountain before last July! Iâ€™m respectful of the challenge and environments I will be performing in, you can see this from the preparation Iâ€™m putting in. However, If I allow myself to be intimidated by it I might as well give up now! If it was easy it wouldnâ€™t be a world first!â€œ