Parks Conquers Denali in Preparation for the 737 Challenge 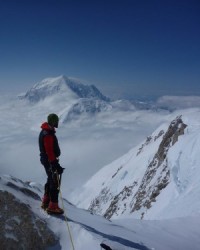 Richard Parks, former Welsh rugby player, arrived back in the UK this week having successfully summited Denali, or Mount McKinlay, in advance of his 737 Challenge.

Denali is the highest mountain in North America and is notoriously hostile due to its Arctic conditions and remote position. It is one of the 7 Summits Richard will be climbing next year as part of the 737 Challenge. He chose to climb it as part of his training as any delays on Everest will force him to make a fast and light ascent of Denali to ensure he completes the Challenge in 7 months. This is only the third major mountain Richard has climbed.

Richard and the Jagged Globe team scaled the mountain in 19 days and were one of the first teams to reach the summit this year. The conditions of the mountain were particularly difficult and no one could have predicted the 18-hour epic summit day, seeing the team battling against the altitude and wind-chill temperatures down to -40â€™ Celsius. Amazingly thanks to his grit, specialist Rab gear and the guide, he returned safely with only minor cold injuries.

Richard commented, â€œThe expedition was hard but very rewarding. I was told this mountain was tough, however I had no idea of what was in store for me! Climbing with heavy loads, being in debilitating sub-zero temperatures, living at altitude for almost a month and the ability to stay strong whilst we were stuck in our tents at 4300m for 7 days, were all invaluable lessons and tests vital to my preparation for the Challenge. It was an awesome experience and privilege to summit.â€