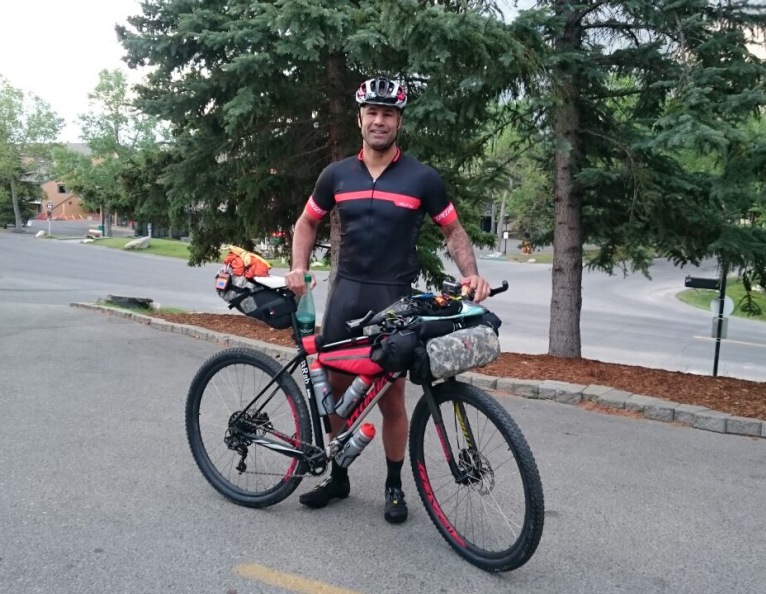 Hi Guys! I'm good, even if I'm shattered! You'll see from trackleaders that the days are long - and the terrain has been tough in places. Yesterday was a cruel one, short in distance but some tough single track and really steep in places blew my legs! Even the sections I couldn't ride were hard work just pushing it! But it's the same old story - one day at a time and keep on spinning! I had a few bike problems on Wednesday - blew my tubeless rear wheel services up and then went through 3 inners! But it got me here and I'd called ahead to the huntsman outdoor shop to order a new tyre, a bottle, as I'd lost mine on one of the epic descents and some extra bar tape to fatten my bars. We're through grizzly country, which is s good feeling. I’ve been nervous in places especially on Wednesday as I had a late night riding through the night to get in at 2am. That same day we'd bumped into another racer who'd been charged by one. Having to use her spray to eventually scare the bear away. We had stopped for a breather and maybe two minutes in she cycled around the corner sincerely traumatised! Needless to say we didn't stop much longer or at all that day!

The dust is putting strain on everything - my clothes, zips, lungs, eyes, my bike is holding up well, but I'm having to spend longer each night servicing it which is tough after the long days. Montana has been beautiful though. It's been great to settle into a pace with Mike from Australia, it seems I've found a few similar paced guys as I see the same faces at some point in the day. With so many dropouts, it's great to be at the 7-day mark. Yesterday was a flatish profile but peddling into a headwind all day on rocky terrain meant that I could've even free wheel down hill! I did have one massive down hill to look forward to at the end of the day and I even managed to do laundry and wash my gear last night! Much needed and an added bonus! Catch you soon. Rich.