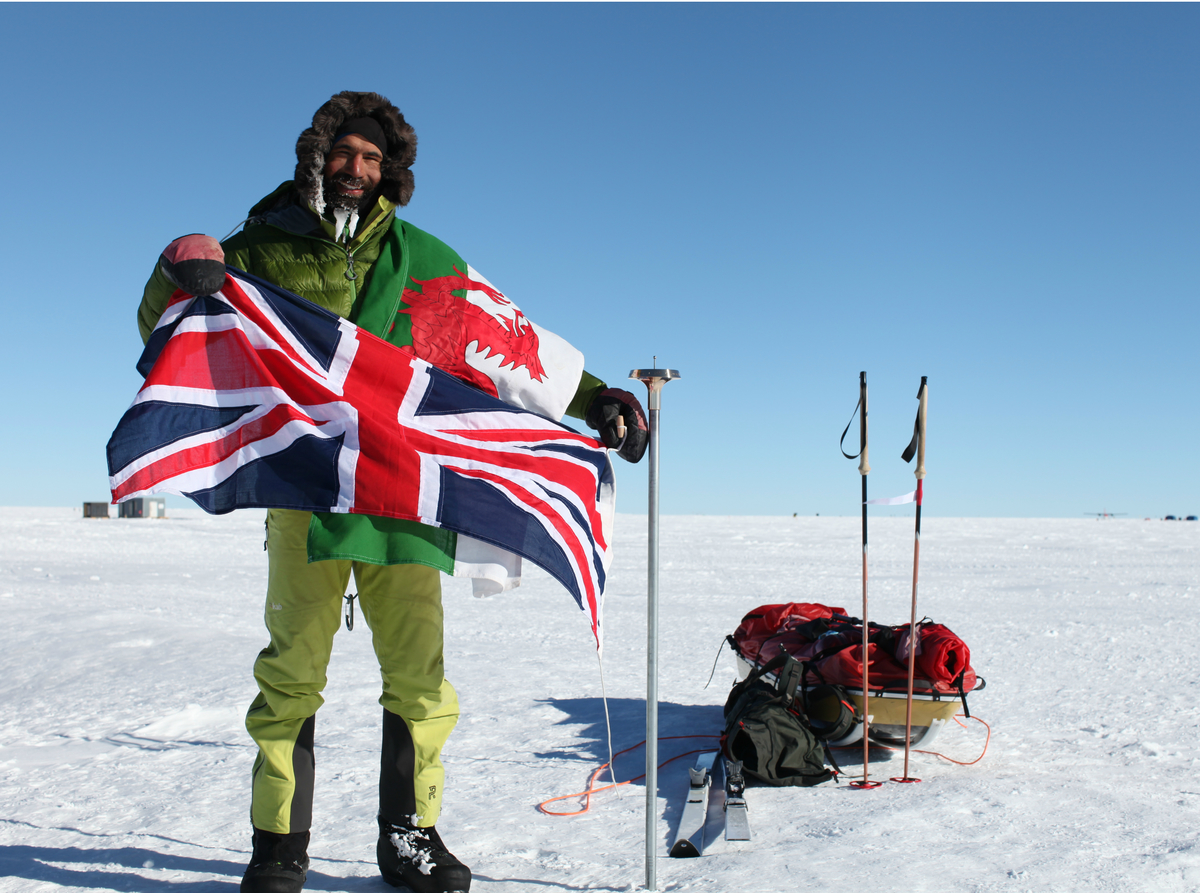 Richard Parks has reached the South Pole, recording the fastest ever solo, unsupported and unassisted journey to the South Pole by a Brit in history.

He reached the South Pole today at 5.24am GMT, 2.24am Chilean time and 6.24pm local NZ time, completing the 1150km/715m solo journey from the geographical coastline of Antarctica in 29 days, 19 hours and 24 minutes, setting a new British record and recording the second fastest time in history.  He also became the first ever welsh person to complete a solo, unsupported and unassisted journey to the South Pole.

Richard has taken just under 10 days off the existing British record, held by polar explorer Hannah McKeand, who in 2006 reached the pole in 39 days, 9 hours and 33 minutes.

Listen to Richard at the South Pole

After skiing a total of 366 hours, 1150km/715miles in 29 days and burning the calorific equivalent of two marathons a day completely alone, a weary, but very happy Richard arrived at the South Pole stating; “I’m exhausted.  Physically I am absolutely shattered, mentally I am frazzled, it is just a lot to take in.  I have a lot of emotions bouncing around but I am happy, proud and grateful.”

He added that the final few kilometres approaching the Geographical South Pole marker and Amundsen-Scott South Pole Station were just as tough as the previous 715 miles; “I could see the station and I was only about 3km away and I literally was having to talk myself out of pitching my tent with every step, I just didn’t think I could put another foot in front of the other.” 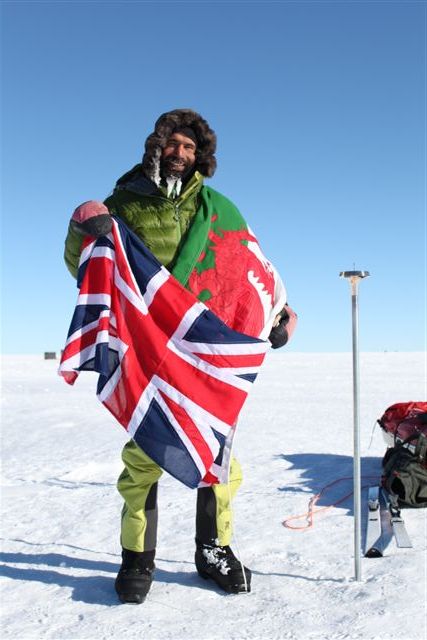 Throughout his solo expedition Richard has faced the traditional brutal Antarctic elements of whiteouts, windchill and sastrugi and has been pulling a pulk, which weighs around 68.2kg (10 stone 7).  He arrived at the South Pole in temperatures of -24c and just under 3,000m in altitude, adding; “I don’t quite know how much weight I have lost, it feels pretty cold and I could probably do with a bit more body fat on me right now.”

Richard’s journey was only the 19th solo, unassisted and unsupported expedition to the South Pole in over 100 years of polar exploration to the bottom of the world.

Despite not completing the journey in his target of 23 days to break Christian Eide’s incredible world record, Parks’ new British record sees him become the only other person in history alongside Eide to reach the South Pole solo, unsupported and unassisted in less than 30 days.

Richard’s epic journey, along with his year of brutal preparation and endurance races will be broadcast in a new television series on Channel 5 this year.

He has had to show immense mental and physical stamina to complete this solo journey, particularly after having to start his expedition all over again after he was forced to turn back following 3 days of skiing in whiteouts and terrible conditions, which put the whole expedition in jeopardy.  He turned around, skied a further 3 days back to his start point at Hercules Inlet, waited for more favourable conditions and started his attempt all over again.  He also skied the last two days of his journey with a broken ski.

Trying to sum up his achievements, Richard finally added; “I felt quite overwhelmed in the last steps getting to the South Pole marker.  So many emotions were bouncing around in my body.  It was not quite the script that I had planned but I was full of gratitude and pride because I know what I achieved is special.  I skied to the marker, took a few minutes just to savor it and take it in, it will probably take a lot longer than that, I will probably be reflecting on this for some quite time.”

1/ Richard started his solo journey on Thursday 5th December 2013 at 7am Chilean time/10am GMT and reached the South Pole exactly 29 days, 19 hours and 24 minutes later, arriving on Saturday 4th January 2014 at 5.24am GMT/2.24am Chilean time/6.24pm local time (South pole operates on NZ time but Richard has been working to Chilean time as his local time throughout his expedition).

3/ Richard started his solo journey on 5th December from Hercules Inlet, the recognised start point on the geographical coastline of Antarctica for solo expeditions to the South Pole.

4/ Richard has become the 19th person to ski solo, unassisted and unsupported to the South Pole.

5/ Richard has recorded the fastest solo journey to the South Pole by a Brit in history.

6/ As far as records show, Richard has become the first ever Welsh person to ski solo, unsupported and unassisted to the South Pole.

7/ In polar terms, the purest definition of skiing solo means unsupported and unassisted, without the help of mechanical support or re supplies.  The style label “solo” requires that the explorer is alone and receives no outside assistance.  A solo performance thus requires the assist label “unassisted”.

8/ The first ever solo journey to the South Pole was recorded by Norwegian Erling Kagge from Berkner Island in 1993 in 50 days.  The first ever solo journey from Hercules Inlet was by Norwegian Liv Arnesen in 1994.  She was also the first woman to ski solo and unsupported to the South Pole, she completed the journey in 50 days.

9/ Out of the now 30 Antarctic solo journeys recorded in history, some have taken shorter routes from the recognised start point of Hercules Inlet to which all modern records are gaged and compared, and some have used kites to assist their journeys or had re-supplies.  Only 19 journeys (included Richard) have skied the purest form of solo expeditions, skiing solo, unsupported and unassisted and there has been only 15 (including Richard) solo, unassisted and unsupported journeys to the South Pole from the Hercules Inlet start point.

10/ Richard becomes the first person to complete the unassisted and unsupported solo journey to the South Pole this season.

In July 2011 Richard Parks became the first person to climb the highest mountain on each of the world’s 7 continents and stand on all 3 poles within 7 months after completing his record setting 737 Challenge.

Richard is a former Welsh international rugby player, earning 4 caps for his country and a professional rugby career, which spanned 13 years.

Richard was an integral part of both the Principality Cup winning Pontypridd side and the Powergen Cup winning Leeds Tykes.  He also played for French side USA Perpignan and Newport Gwent Dragons.

As a back row forward, he made a name for himself as a hard, prolific tackler and support player.  In May 2009 Richard was forced to retire from professional Rugby due to a career ending shoulder injury.

In the year leading up to his current solo South Pole expedition, the extreme environment athlete and adventurer completed 12 months of brutal training and preparation which saw him ski for 39 days solo in Antarctica, complete the highest mountain bike race in the world in Nepal, take on the Jungle Ultra in Peru and compete in a double ironman in Snowdonia.

This is the second time Richard has stood at the geographical South Pole.  Richard skied the last degree as part of his 737 Challenge in 2010/2011.