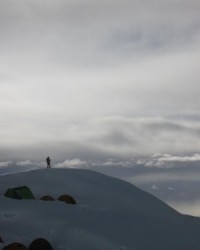 Richard Parksâ€™ final training expedition has been cut short due to a dramatic turn of events on Cho Oyu. Parks and Steve Williams were due to attempt their final push for the summit from camp 2 tomorrow. This had already been delayed due to severe avalanches on the mountain. Just last week a Tibetan team of climbers were involved in a serious avalanche and had to be rescued from the mountain. Parks, Steve and their team from Jagged Globe were hoping that weather conditions would improve over the weekend allowing them to make their ascent of the summit, however on Friday a massive part of the icefall fell off with the sherpas having to fix new ropes on it and more near fatal avalanches have followed.

After waiting patiently over the weekend, Richard and his team took the decision to attempt the summit from camp 2 instead of summit 3 to improve the rate of success. A decent weather window was forecasted; 44km winds and minus 36 degree windchill on the summit and minus 25 at camp 2!

Richardâ€™s latest updates from this morning revealed that everything was looking good, the first team left and Richard and his team were hopeful to follow. The sherpas were fixing ropes and making great time up the upper mountain.

Then, yet more drama struck, the sherpas were caught in the 4th potentially life threatening avalanche on the mountain, with two of them not being able to be located for 40 minutes. Luckily there were no fatalities and only a few injuries. The avalanche was in the same place as last weekâ€™s where 7 climbers were caught in it. With heavy snowfall and fierce wind conditions/direction loading on a certain section on the upper route, the upper part of the mountain had become incredibly perilous.

With many other teams pulling the plug on their expeditions and going home, the worst conditions for many years on Cho Oyu have forced Richard, Steve and their team to end the training expedition.

THE DECISION TO PULL OUT

Richard stated; â€œWe had a meeting today with all the sherpas and team leaders of all the teams on the mountain, and although we are the last to come to this decision, we've had to make the really tough decision to pull out. The conditions are too dangerous to climb the mountain, the worst for quite some time, some sherpas canâ€™t remember it ever being this badâ€.

He added; â€œA heavy monsoon and long lasting tail end, has dumped an extraordinary amount of snow on the upper mountain, which has formed a very dangerous layer system. Ice covered by a 2/3m thick sugar snow layer covered by a thin harder crust. 2 sherpa teams trying to fix rope above 7500m have been caught in very near fatal avalanches, they arenâ€™t â€“ understandably, willing to attempt to fix the ropes this season. 2 more very near fatal avalanches lower down the mountain on the ice fall have made our decision a little easier. I am gutted, but it's a very rare season when nobody will summit. We're cleaning the mountain of our gear in the 2 camps over the next few days and will be in Katmandu by the 2nd/3rd October.

Finally Richard stated; â€œI am disappointed, but this is mountaineering! The avalanches have been savage and we are very lucky there hasnâ€™t been any fatalities - the stories are movie like from Cho Oyu. I will be back soon to rest and re focus my efforts and thoughts on the start of my 737 Challenge. Thank you to everyone for all your messages of support on facebook and twitter, my team back home got them to me every day and they really spurred me onâ€.