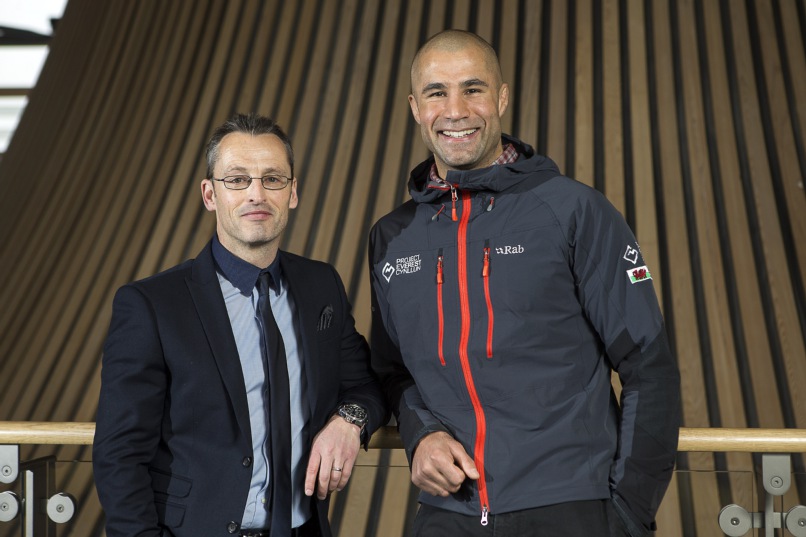 Well here we are almost 2 weeks into the expedition and I’m sipping “white coffee” in a luxurious tea-house in Chukhung (4,730m) deep into the Solokhumbu Valley. This “terrestrial” altitude is almost identical to the “simulated” altitude that I frequently expose research participants to back home in Wales with the use of my less aesthetic high-altitude chamber. I know where I’d rather be given that I’m surrounded by a breathtaking (pardon the pun!) panoramic view of Himalayan giants etched against a dark blue sky with spiralling spindrift caught up in the jet stream. Everest just seems so high-up and almost untouchable from here!

Even though our acclimatisation strategy is working well, the breathlessness often reminds me of the discomfort patients at sea-level suffering from congestive heart failure or chronic obstructive lung disorder encounter on a daily basis, the caveat being without the views. The oxygen lack that I’m feeling here is almost identical to the oxygen lack they experience and my night’s broken sleep where I find myself fighting for that extra precious breath of oxygen depleted air puts their daily battle into clearer context.

Back to business; this is not a vacation! Our next objective is Island Peak (6,183m) with basecamp (5,000m) located about a 3h trek away. We leave tomorrow at 8am to spend the night at basecamp before moving to high-camp were we’ll spend another (likely restless!) night before the ascent to the summit. This is an important jigsaw piece in the scientific puzzle for me since it constitutes the first real opportunity to practice the “summit science”, simply put a dry-run to make the measurements that Richard will attempt on the summit of Mt.Everest itself in the weeks to come.

We’ve completed a slew of measurements in the comparative luxury of my simulated high-altitude chamber at the University of South Wales and already I have preliminary insight into what makes Richard’s brain so suited to performing well at high-altitude, compared to an age and fitness-matched mere mortal! But an oxygen-less ascent remains unchartered territory for both scientist and mountaineer and my attention now turns to perfecting these unique measurements. 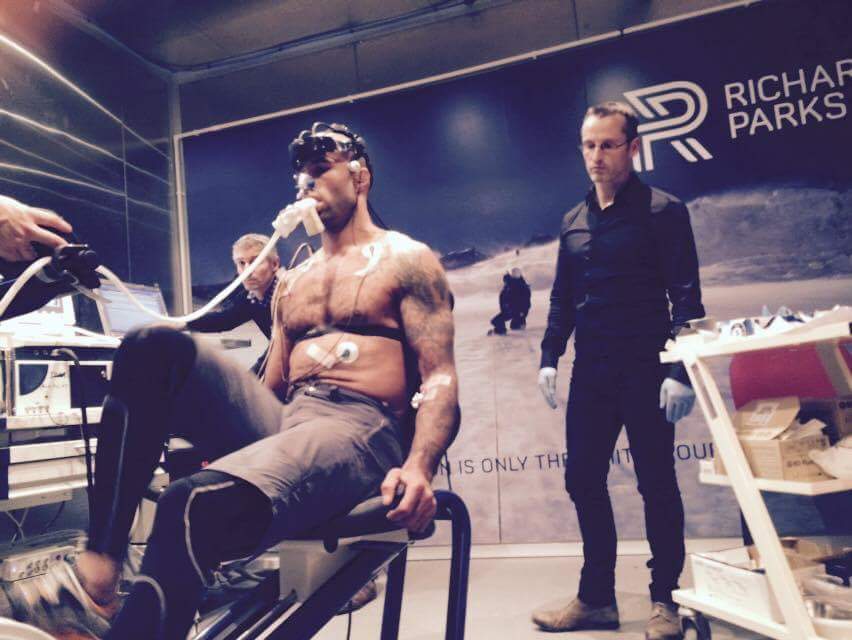 Richard undergoing testing with Damian at the University of South Wales Environmental chamber.

You’re hopefully familiar with the fundamental concept behind what this expedition outside of the physical feat (not insignificant!) is looking to achieve, simply put, to what extent does improving oxygen delivery to Richard’s brain through acclimatisation offset the impairment in his ability to remember, reason and formulate ideas (cognitive function) caused by the oxygen lack? Island Peak will spin this hypothesis on its head, that is to what extent will this high-altitude peak negatively effect all of the above? So we’ll be armed with different bits of portable equipment to serve as a litmus test to answer this question, which has clinical relevance for those of us that are inexorably moving towards older age and the inevitable cognitive decline that is likely to ensue (what a depressing thought!).

So here’s the checklist; Richard and I have run through this on numerous occasions and the time is nigh! Consumables for the sampling of arterialised capillary blood from his earlobe, consisting of special glass tubes with a plunger to push the frozen-stiff blood out into a portable analyser jam-packed full of clever technology squeezed into the size of a 1980’s mobile phone (without the battery back-pack!). Mustn’t forget the scalpel and chilli cream to ensure good blood flow so that we can fill at least 4 of the glass tubes with precious blood destined for the measurement of oxygen (miracle molecule that keeps us alive and turns our lips blue when in shortage), carbon dioxide (that stimulates our breathing and controls blood flow and oxygen delivery to the brain) and other molecules that tell me how his blood is coping (or indeed not!) with the lack of oxygen. 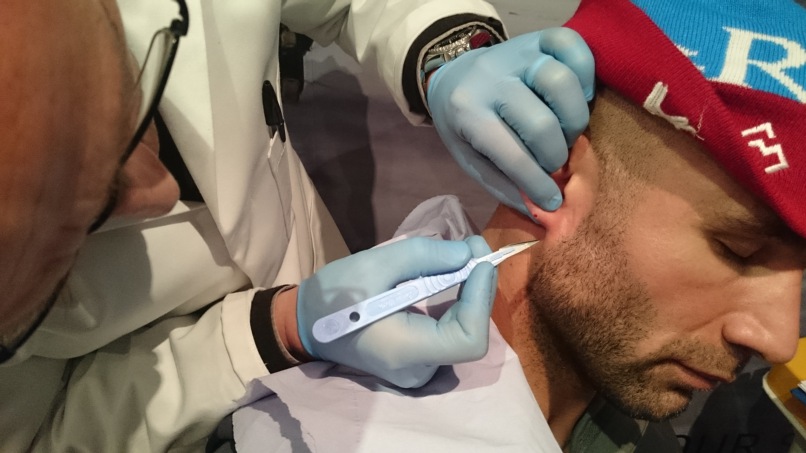 We’ll also measure how quickly his blood clots and to what extent the lack of oxygen has affected the way the tiny proteins in his heart muscle work. OK, that’s the blood for now, so what else are we measuring?

We’ll be packing a miniature canograph (posh word for device that measures the amount of carbon dioxide in Richard’s breath when he breathes out). He’ll be breathing in and out very quickly at this altitude and I’d expect his carbon dioxide levels to drop to very low levels. Not always a bad thing but it’ll cause the blood vessels that supply the precious little oxygen to his brain to clamp shut, a bit of a paradox really when you think about it; breathe more to get more oxygen on board, but yet limit the amount of oxygen that the brain sees! This has always bothered me given the brain’s disproportionate reliance on oxygen, but lets not get too philosophical until we’ve made the measurements!

I’ll need to shave Richard’s furry chest to apply special electrodes and attach a tiny device the size of a USB key that will allow me to measure how stressed out he becomes with the combined stress of oxygen lack and exercise. This is another bit of “clever kit”, cunningly small and packed full of electronics that’ll sample aspects of his heartbeat 1000 times per second! And no, his heartbeat won’t be 1000, likely 150 beats per minute towards the summit, don’t get confused, he’s superhuman, but not that superhuman!

I’ll also ask Richard to swallow a small pill that looks like an ibuprofen tablet! Not for headaches (we’re trying to avoid these like the plague!), but it’ll send radio signals that will allow us to measure his core temperature, important information for the correction of blood oxygen measurements. It’s a great bit of kit but it has to stay inside his tummy for it to work; must remind Richard that he needs to take some loperamide hydrochloride (imodium) to bung himself up so no pooing for 24h!

The final bit of kit that we’ll be carrying to the summit is a tablet so that we can further (note the word further!) challenge Richard’s brain with specialised software that will test his cognitive function (our primary outcome measure). Oh, one final thing; we’ll have a dummy run of the muscle biopsy, no needles (rather chicken skewers!) this time around, just play-pretend so that we can time the measurements and ensure that we avoid frozen fingers!

Seems quite straightforward really doesn’t it? Well it is pretty easy…at sea level! But it’ll be as cold as -10c on the summit and with way less barometric pressure up there too (by the way, it’s the decrease in barometric pressure that causes the oxygen lack!). Why should these things be an issue? Well, the kit likes to perform in 5* conditions, warm, thick air and despite my best attempts to simulate the extreme environment encountered at high-altitude at home in the laboratory, nothing compares to performing the measurements in the field itself! Lots of unknowns and any glitches will need to be solved before the real test, repeating the same measurements in less than 15 minutes having climbed the world’s highest mountain without oxygen! Here’s to summit science success!