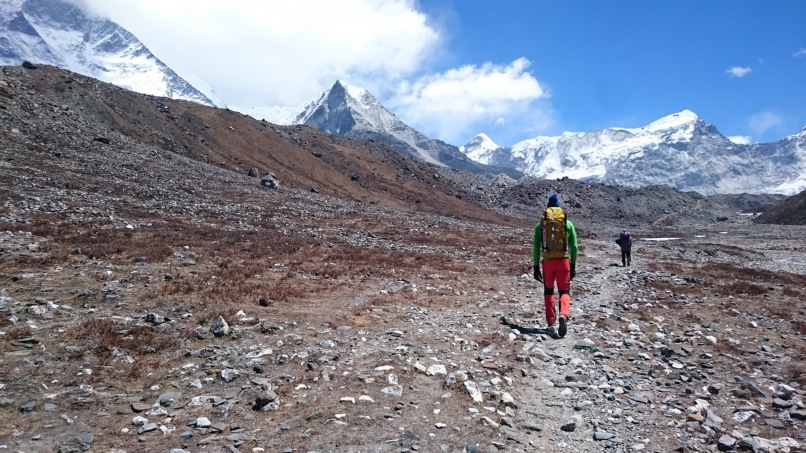 Physios and coaches (technical and strength and conditioning) observe. It’s what we do. Sometimes we measure those observations, sometimes it is more of an art. It’s usually to improve, correct or copy good patterns. I thought I’d write my second team blog with that in mind. A few things on what I’ve observed so far - about people and how some of the dynamics have similarities to High Performance sport, despite Project Everest Cynllun being such a unique individual challenge in many ways.

I’ll start with the Sherpas. They look and move like elite athletes. They are rock stars in their country, probably like NBA players in the US, or closer to home, like a Welsh International rugby player walking down the street in Cardiff! The Sherpas are not big in stature but have the strength, agility and endurance needed for their work, along with a technical and tactical skill that allows them to help so many people achieve their goals in summiting various peaks in the region, including Everest. The technical skills are anything from setting up fixed lines on dangerous routes, to estimating weight with a glance or a single lift, just in the same way that I’ve seen weightlifters spot if a competitor has put on or lost weight before a competition.

Richard’s climbing partner for this expedition is Chiri Pema Sherpa. We will meet his second Nepalese climbing partner and cameraman at Everest Base Camp. We also have a guide, BJ who is joining us on this first part of the journey through the region. BJ walks ahead and Pema picks up the rear, checking everyone is OK…. usually me. Being at the back most of the time allows me good observation time. BJ, as the guide walks at whatever pace the person behind him goes. He doesn’t look as if he is changing pace in the least but he will stay just a little ahead, however fast the next person walks, which makes me wonder how fast he could actually walk if allowed to go at his own pace. They have a very efficient gait - not the rangy type gait you see in a typical distance athlete, it’s different. On each steep uphill step they let their trail leg reach full extension before transferring weight and starting the next step, which gives their quads a rest before taking what seems to be a slow motion step up (Richard taught me this one earlier on in the approach and it does help keep your legs going a bit longer when walking uphill for hours!). Then when walking up or down a less steep hill (I haven’t seen anything flat for days) they take a longer swing phase by almost flicking the leg through, again to full extension, before footstrike. I tried that as well after observing both BJ and Pema and I think this probably loosens the leg, reducing quad tension in some way. The scientist in me would love to observe some of these gait patterns in our movement lab back in Cardiff University! 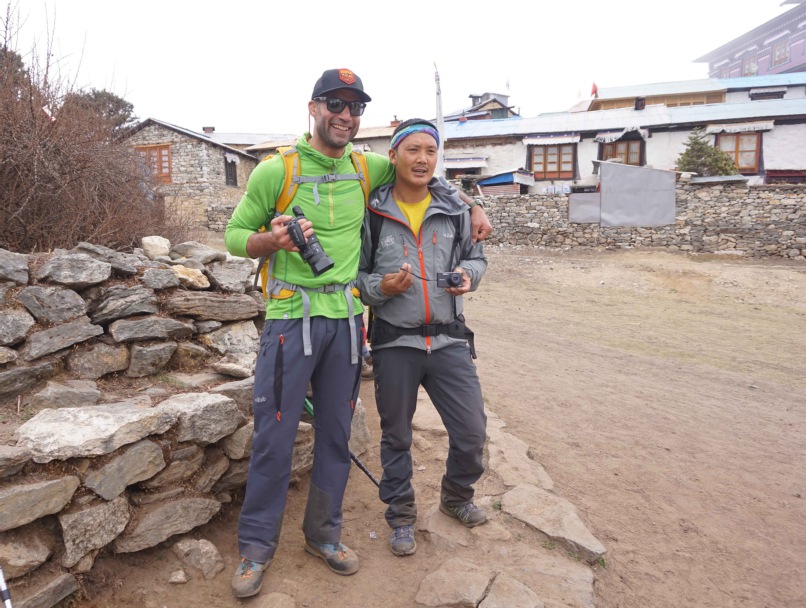 Then there’s Gareth Morrow the TV director/producer on the trip. We sometimes forget, when sitting watching documentaries in HD that for us to sit on our sofas watching a challenge unfold that someone has usually had to go at least part of the way to film it! Gareth will be going across the Khumbu Ice Fall with Richard and Pema and he will be carrying about 15Kg of camera equipment, whilst Damian and I sit in relative comfort at Base Camp. 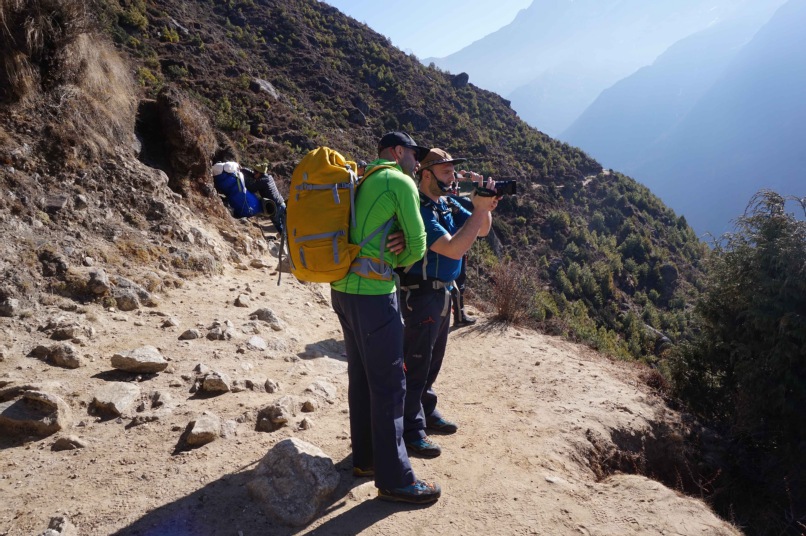 He is an experienced mountaineer in his own right and he and Richard are already making a good team. This starts to put another facet on this preparation phase - not just physical but putting a team together. A team that is going to need to operate very slickly at times in a potentially dangerous environment, with little room for error - except that this team has not worked together for years as you would typically observe at a major competition. It’s more like an invitation team - a British Lions Rugby Union touring team for the mountaineering world!

Richard’s preparation over the last months seems to be paying off. Just like a tapering phase before a main event, the aim now is to allow his body to acclimatise to the altitude and build up energy stores ready for a maximum effort. The difference is that this performance will be at a very high altitude and there are no real short cuts to developing the extra red blood cells needed to perform at such low levels of oxygen. In a way that makes the inaccessibility of the region useful. The only real feasible way to get to Everest is to walk there from Lukla. There are a few routes to take beyond the well trodden trekking route, depending on how much altitude you want to get to along the way but essentially it’s going to take you a few weeks. Richard’s plan is to keep his overall effort below 75% exertion during these few weeks, although he’s doing that trekking up some pretty steep slopes carrying around 15Kg on his back. My bag weighs more like 7Kg at the most but apparently my tortoise-like “speed” helps keep the others stay below 75% effort……… I’d say I am on that threshold most of the time and sometimes above it but I only have to get as far as Base Camp!

There’s a balance to be made between allowing full recovery during a tapering or late preparation phase and detraining. Despite set protocols often seen in other sports, this has to be more of an art than true science, not the least because Richard is also fulfilling a “Western Leader” role in addition to being the athlete preparing for an event. The lead into this project is slightly longer than it would typically be for a major championships or olympic/commonwealth games because of how long it takes to get there, so there is a risk of detraining. To manage this I would compare walking between places as keeping ticking over, whilst making sure Richard stretches every day. The Pokalde and Island Peak days are harder bursts and also akin to highly sports specific technical sessions. That way we should get the right balance so that Richard keeps in the best possible physical shape for what’s ahead. Psychological shape is another thing: I’d suggest that what he is doing is pretty unique in that as well as needing to treat himself like an athlete, he also has to manage the group on this approach. He is doing all the operational and managerial things we would usually protect an athlete from at this time out before an event. An “event” that he has set up and project managed himself. I think that’s probably a subject for another blog! 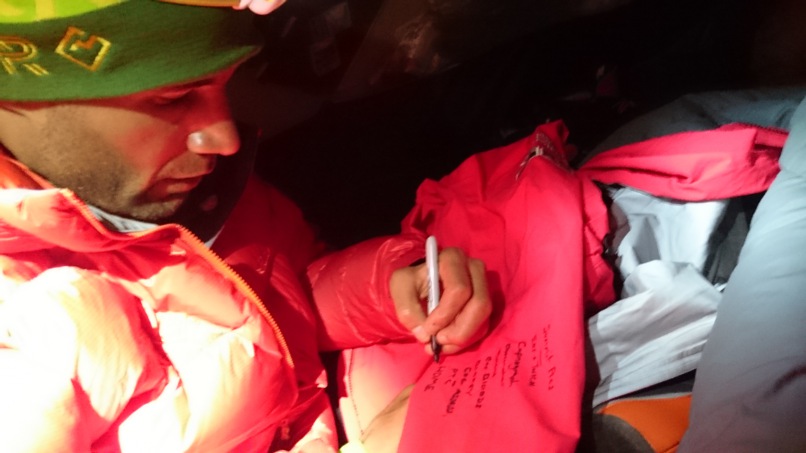 The need to gain altitude as part of preparation and the fact that there are limited routes to get there, means that all those climbing Everest from the Nepal side will cross paths quite a few times on the way. It’s obviously not a competition, everyone knows that. Each person is respectfully pitting themselves against the highest mountain in the world. However, the jostling, eyeing up other teams as well as sharing stories that goes on is a bit like what you might see in a popular training camp region; somewhere like Spain, Florida or the Gold Coast. Chukkung has been a bit like that.

Ueli Steck was here initially - he’s perhaps the Mo Farah of the mountaineering world. Everyone wanted to chat to him to ask what he was doing this year. Filming teams who were here with other groups wanted to snatch an interview etc.

Our Sherpa, Pema is very experienced, having summited Everest 12 times, the first at just 17 years old. Mingma, the Sherpa who summited with Richard in 2011, was also here a day or so. He will be summiting for the 20th time this year and was here with a filming team preparing to make a film about him next year……. As I said earlier….. rock stars! 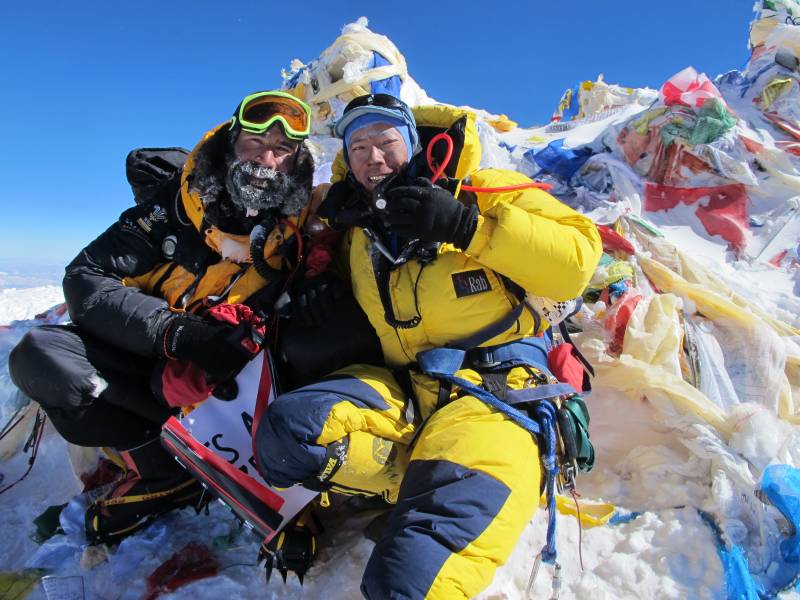 Richard and Mingma on the summit of Everest in 2011

All in that mix has been groups going through of people doing this for the first time or making a once in a lifetime experience. All trying not to be in awe of the well-known faces of the mountaineering world……… Also as I said earlier….. just like a training or prep camp or a Games Village!

Once the boys come back from Island Peak I will join them to continue my tortoise-like speed to Base Camp over the next few days, so my next contribution may well be from there. For now I’ll keep telling myself the story of the tortoise and the hare!