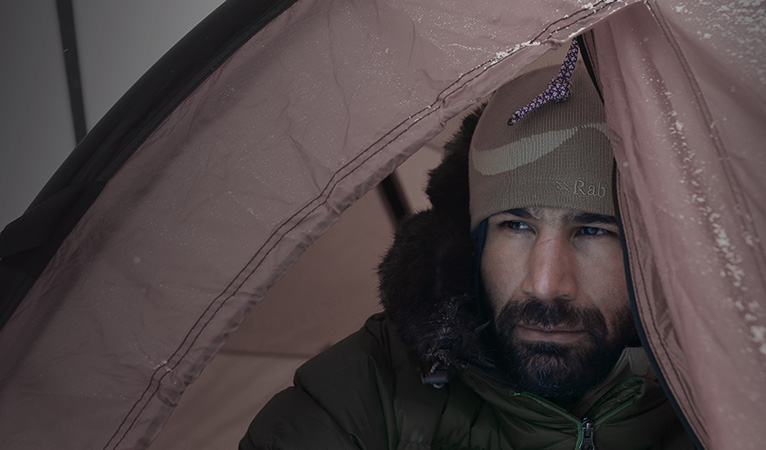 The last few days have felt like they have been genuinely the darkest, difficult and challenging days I have experienced.  I feel like I have been tested physically, mentally and emotionally to the limit.

It has been so demoralising and frustrating to have got so close and be hit by horrific weather conditions.

The sastrugi conditions have been the same for everyone, its just one of those things I have had to deal with.  It’s completely changed the expedition but had the weather been more favourable I still would have been able to get through them, all be it slowly but with this and the bad weather on top it has been a massive kick in the nuts.

I have virtually had 3 static days now unable to make any major progress and it has just been so difficult.  Because of the conditions it has been bitterly cold and I know this is Antarctica but a combination of my extremely low body fat, fatigue, altitude...I have never experienced cold like it.

When I made the decision to organise a food drop, which I know was the right decision, it was planned for yesterday and it significantly lifted my spirits.  On that day naively and foolishly I ate 2 days worth of meals, which I guess I needed but in hindsight was naïve.  That night when I skied, although I only skied for 4 hours was I was moving at speeds similar to earlier in the expedition so it gave me an insight in to quite where by body was at, however conditions have deteriorated and yesterday the ALE crew were unable to do a food drop.  Firstly the aircrew were unable to fly and secondly because I was unable to move to make progress, the aircrew can’t land because of the sastrugi that I am currently in so yesterdays food drop was abandoned.

All this combined with being sat in a tent are playing havoc on my emotions and it’s generally a difficult time.  I remember a fitness coach from about 10 years ago called Rittaz at Ponty who gave me my first insight in to deprivation training.  Since then I have expanded this and deprivation is the cornerstone to my training but I remember him saying that for every cup of coffee or tea he had he would put two biscuits on the plate next to it and only eat one of them and yesterday having only 1½ days food left, not knowing if food is coming and feeling so hungry it was so difficult not to have more to eat.  It took all the willpower I have and I had half rations yesterday for safety.  Having been working close to my physical limit and with little body fat left, I am genuinely shattered at the moment.

Last night I am not ashamed to say that I made my first truly bad decision of the expedition.  At about 10pm I decided to try and ski in marginal conditions.  The wind is mild, it’s extremely cold, the visibility I have had lately is poor.  There is little or no horizon, very little or no contrast on the snow, so no shadows and you have no idea what’s in front of you or what’s underneath you and it’s very difficult to navigate as you have nothing to visualise or have a bearing on and it’s too cold to use the GPS.  So last night I wasted energy, I packed the tent up, moved for 1 km and had to re pitch the tent, it was the wrong decision and one made out of frustration and bit if desperation.

Last night in my bag I couldn’t even escape my mind, I didn’t sleep that well, all kinds of thoughts were going through my head but there is always a new day and today my situation has significantly improved.

The cloud has cleared a little to 40-50% cloud cover, I can see a horizon for 360 degrees and the sun’s disc is clearly visible which has given me some much needed solar warmth and taken the edge off the cold.  All this combined with a really positive phone call with Steve Jones, the operations manager at ALE, who has become a good friend, has perked me up.

The weather at Union Glacier Base Camp is good today but it’s deteriorating over the next few days there, so the pilots are prepared to fly today and although they are unable to land in my terrain we have organised an airdrop of food this afternoon.  The ALE team have been absolutely incredible.  The company as a whole has an incredible ethos, however the team have been so supportive and I know that a lot of people have gone to a lot of effort to support me since day 1 and my lost luggage.

If and when this happens today it will be a huge boost.  It is important to stay stationery for the food drop which means another stationery day with no km’s covered but means resting, fuelling and getting my head right for what can only be described as an epic finish to the expedition to get to the pole for the 28th. My food drop means I haven’t lost my solo status but I have lost the unassisted and unsupported status.

I have composed myself now and once again focusing on what I can control and that is taking today to rest, eat when I get the food and start afresh tomorrow.  Skiing in the night hasn’t helped; it’s disorientated me a bit, so tomorrow I am going to go back to my original system.

I am in constant communication with my parents, girlfriend and project manager which has been massive and all the messages and support I have had from friends, followers on Twitter and Facebook has been incredible and sincerely kept me going over here so thank you guys, so much.  Back to one day at a time and having faith that all the pieces will add up.