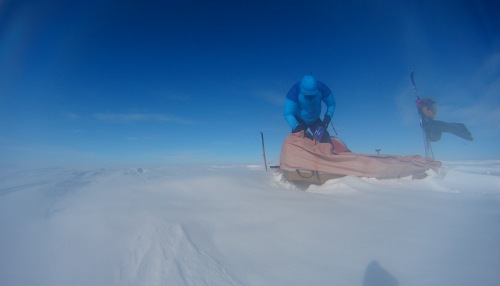 Hi Guys.  Well my hashtag “back in the game” was short lived.  I skied for 3 hours yesterday covering 4.27km.  My 30km day on Wednesday, which seemed really promising for everyone including myself, was considerably tougher than any other 30km day I had done on the expedition so far.  The last week has really taken it out of me and during that 30km day I was operating at a level that was pushing the boundaries of safety in this environment in order to achieve that.

This environment is unforgiving and hostile, one of the most hostile on the planet and being able to operate but make clear decisions at the same time, especially on a solo expedition is non-negotiable.

Wednesday night in my tent I was looking at my map and the numbers, my heart began to sink with the reality of the situation.  I didn’t sleep a wink, partly because my body clock is disoriented as I have been skiing through the night and because of the 24 hour sunlight but mostly I was playing through every scenario possible of if I could get to the South Pole by the 28th and just to be clear, that it’s the end of the day on the 27th that I have to be there by.

The most obvious option would be to ditch the 24 hour operating system I have been running and adopt the same principle as I did on Denali and just ski, eat, ski eat continuously using the 24 hour sunlight or the other option to try and get two big days in on a 24 hour push at the end…but I kept coming back to my last 30km day on Wednesday and at what cost that would be.  After 39 days and having been operating a very very tight system with no injuries, that particular 30km day and working at that level and pushing that hard, it affected my judgment.  I was working so hard and I took my facemask off to get more breath in as it clogged up and I have cold damage to my nose now.

In an environment as unforgiving is this, in my opinion, safety is non negotiable.

This has been one of the most difficult decisions I have had to make being so close, having progressed so well and having invested so much in to this, however expeditions are difficult things and in life we all have to make difficult decisions.  I have made this decision with all the facts on the table with a clear head and clear heart and I am really sorry to tell you guys that quite simply I have run out of time over here.

I have been starving myself close to 40 days now, that is the nature of it as you can’t consume more calories than you burn, it’s the fine line you run but I am skin and bones over here.  I am the weakest and lightest I have ever been.  The last week has really battered me basically.

I was in a good system and place until I hit the epic sastrugi.  Everyone else has had to go through this just the same as me, there are no excuses but I had to fight for every metre in horrific weather conditions as well as this and it absolutely battered me.  The last few days my body has taken a significant turn for the worse.  My mouth is full of ulcers and even though I have had fantastic food from Fuizion and have taken my daily vitamin and mineral supplements which are also in my daily food bag, my body is run down to a point where I have not been before.  And to pick my first cold injury as result of mental and physical fatigue is an alarm bell that I am not going to ignore.  I physically and safely cannot cover 200km in 3 days.  I simply have run out of time.

Although I am gutted I am at peace because I know I have done everything I can in my control and it is the right decision.

During my keynote presentations that I do, I refer to how we can’t always control the cards that life deals us with – had I not lost the extra week losing my luggage, had sastrugi conditions in the 87th degree twilight zone not been the worst many experienced people have ever seen, on top of that had I not been hit by horrific weather conditions in the same period and with my big distance hauls for ¾ of the expedition - today I could have been having a beer celebrating possibly the 2nd fastest solo coast to pole expedition of all time and a new British record.  However, we can’t always control the cards that life deals us with but we can control how we react.  I’ve done everything that I can with integrity and safety to give myself the best chance.  Simply, I have run out of time.

Times like this I think of a poem that is powerful to me and that poem is If by Rudyard Kipling.  I’ll let you guys read it or discover it for yourselves if you want to.

As with all expeditions there are many cogs in the machine and there are a few people that I would like to take the opportunity to thank.  The expedition sponsors; Rab, Limegreentangerine and Fuizion.  All the team at ALE, especially Steve Jones.  Anton Sports in Norway, Simon Lowe, Roger Mears and the team at Jagged Globe once again.  Andrew at Ace Feet in Motion, Sony UK, MSR and Jonny and my management team at Wasserman.  My exped manager Tracy, my girlfriend and my Mum and Dad who have all been rocks throughout the build up and the dark days of the expedition and finally to all of you guys for all your incredible support and messages throughout the project.

The timescale involved in the expedition always meant that it was a very fast expedition.  If successful it would have been record breaking, however I have never lost sight of the fact that this is an R&D expedition to prepare for another bigger world first project next year and taking the emotion out of it, I have got 90% of everything I needed from this expedition and it has been a success.  The Parksy of a few years ago would have been very black and white about this, but an older, wiser, Parksy has realised now that success isn’t black and white and there are many shades of grey in between.

It’s been a privileged start to 2013, seeing in another New Year’s Day in Antarctica and as brutal as this expedition has been, we have had some incredible experiences and I say we referring to you all.  2013 is an exciting year ahead for us.  I have lots of exciting things to share with you guys in the pipeline when I can and I am feeling really amped about it.